Today we speak to a man who has, quite possibly, the best job ever… Lego artist.

Duncan Titmarsh’s passion for designing and building Lego sculptures turned from a hobby to a commercial reality in 2008 when he became the only person in Britain to be officially recognised as a Lego Certified Professional by the famous Danish toy company.

From there Duncan made the decision to make his dream a reality and start his own business, Bright Bricks, which creates giant custom Lego structures. It has an impressive client portfolio, from Stella McCartney who commissioned a life-size tiger cub to a Phillips commissioned a giant toothbrush for a new product launch. We caught up with Duncan to find out how it feels to play with Lego for a living… 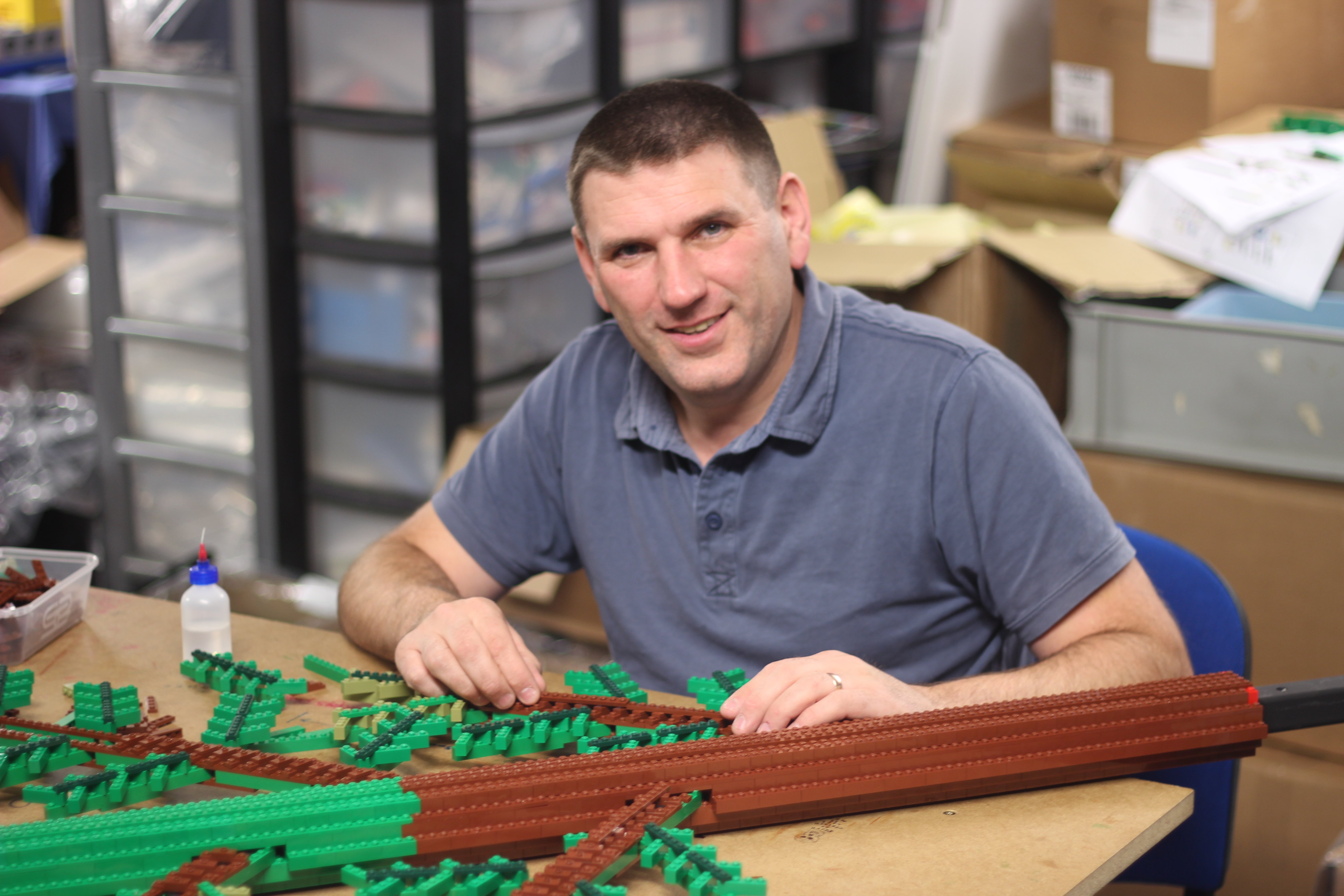 1. How did you end up in one of the most coveted jobs in the world?

I remember getting my first Lego set at the age of four and building throughout my childhood. I also won a Lego building competition when I was 11.

I stopped playing with Lego in my teenage years as I joined the Royal Air Force and went on to work in the building trade. However when my daughters started playing with Lego it rekindled my interest. In 1992 I remember walking through the toy section in Woolworths with my wife and stopping to look at the  Lego. I told her how I spent hours playing with Lego as a child and she suggested that I buy a new set, so I did. I got so into it that I went and found my old  Lego sets in my parent’s loft and I just kept building from there.

On a trip to Legoland, I met with other adult fans and became involved with The Brickish Association. Then one day I was invited to BBC Radio 4 to create a reconstruction of the Today programme’s studio. Following that I was called by someone and asked to build their building and that’s how my business began.

2. How did you become a certified Lego professional?

To become a Lego certified professional, you must have a business already. I didn’t know about the scheme when I first started Bright Bricks from my garden shed. I only found out because I built a big old yellow castle, a Lego set from 1978. I made the castle following the original instructions but I built each brick six times bigger. The people at Lego saw that and asked if they could have it at their Lego Idea House Museum in Denmark. So I went over there and found out about the programme, and I applied from there.

It’s every boy’s dream to play and work with Lego for the rest of their life – I love it.

3. As Founding Director of Bright Bricks, what does your role involve?

I was on my own at first, but now I have 30 staff. We spend our days building amazing sculptures from  Lego bricks, running Lego building workshops in schools and creating custom mosaics.We also do trade shows and build on the trade stand. It’s now a full-time business based in our large workshop in Hampshire, UK. 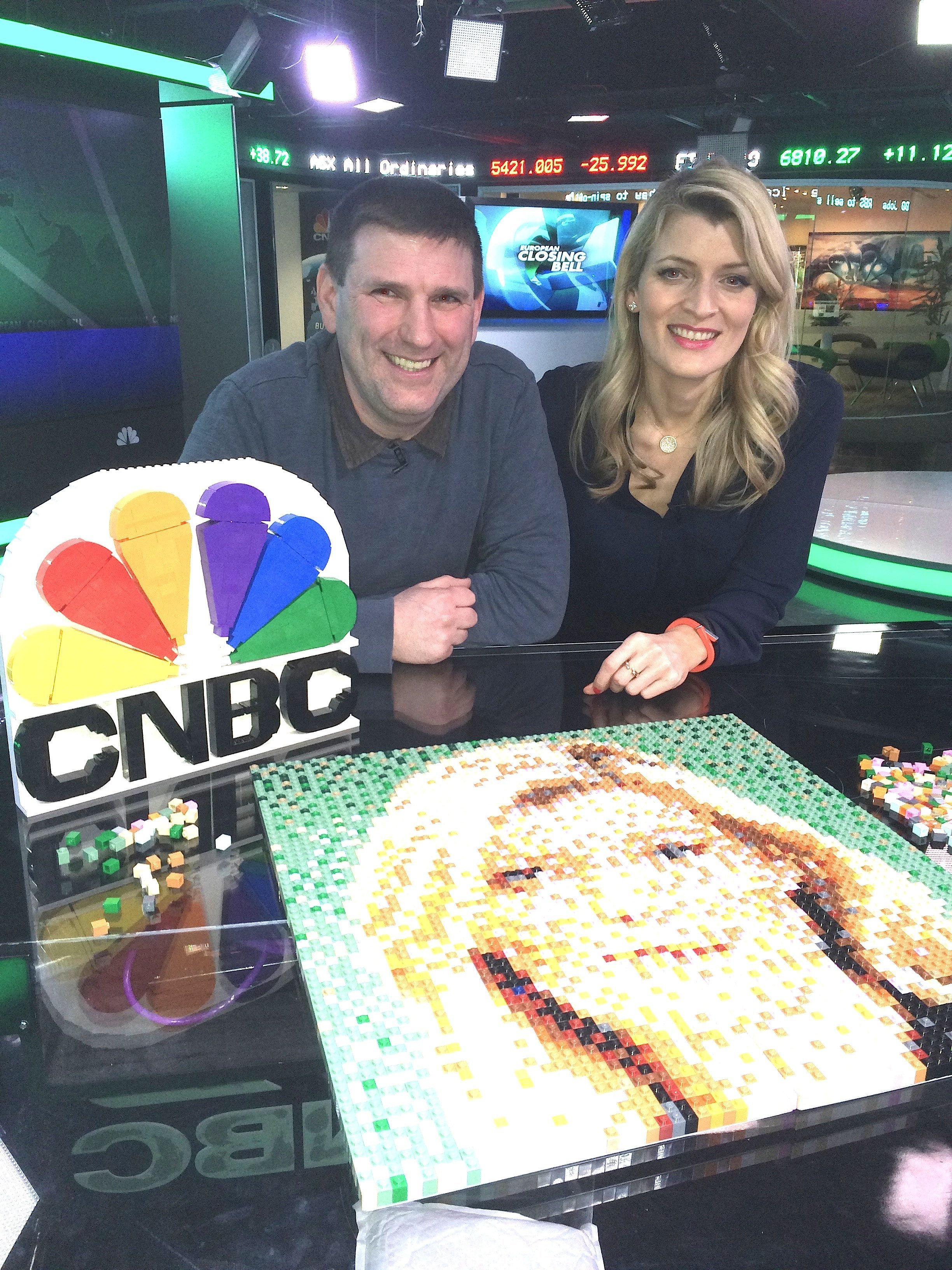 Duncan with CNBC’s Louisa Bojesen – and her custom mosaic

A typical day starts with me checking my emails. I then go and see how the builds are coming along in the workshop I also deal with enquiries and schedule work. Primarily my time is spent dealing with clients and doing events. I also go out to schools a lot to speak to children about what we do. I really enjoy that part of my job.

I love working on new product launches, coming up with original promotional ideas and overcoming the challenges that building complex models brings but we also have pressures just like any other business, like getting everything done, staying ahead of the game and meeting tight deadlines. 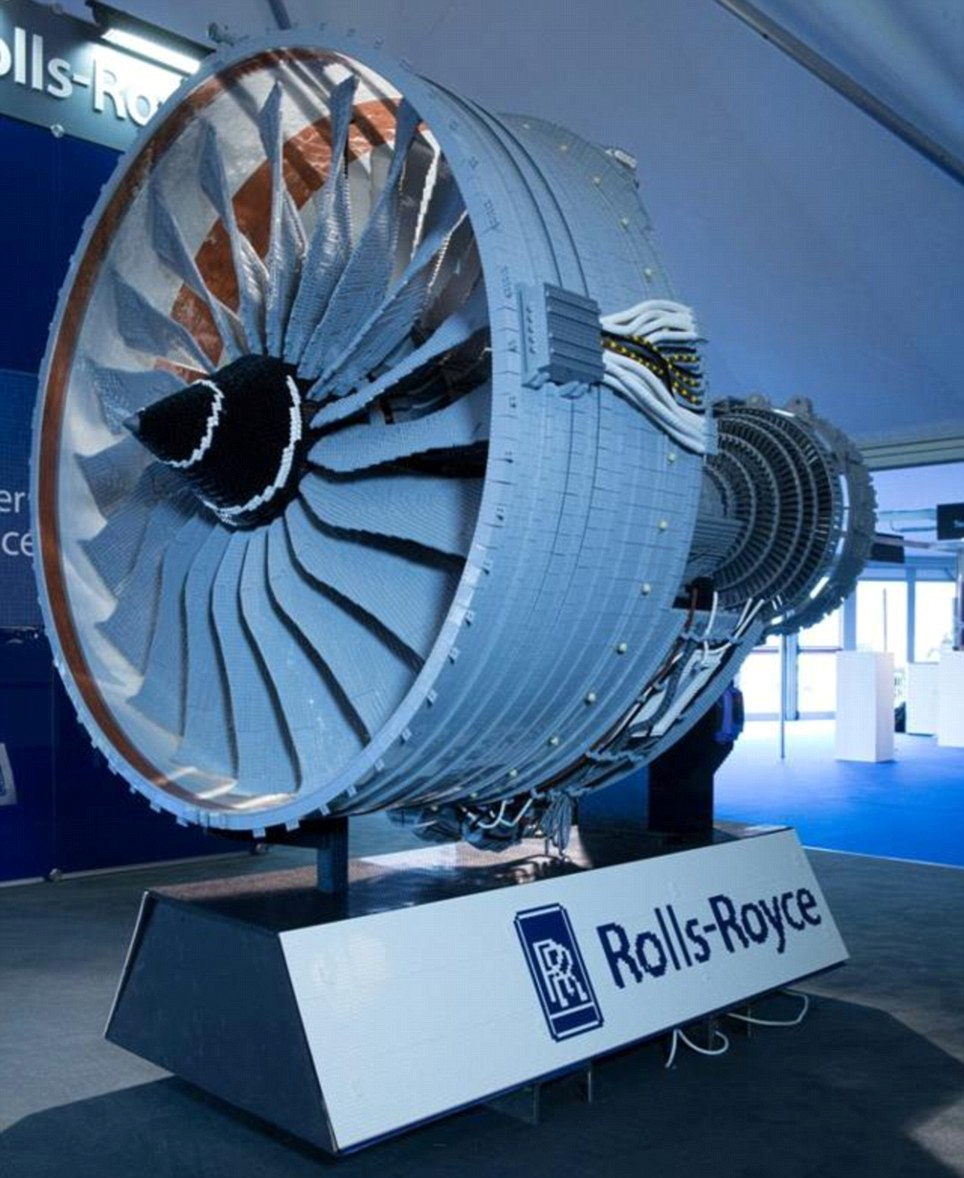 A Lego engine for Rolls Royce

4. What are the best bits, and the worst bits, about what you do?

The best bit is standing back and looking a finished build and then seeing a client’s reaction to it. We also love putting a model into a public space and watching people’s reactions to it. The worst bit is the moment you realise a build is going to take way longer than you initially thought.

5. How do you take an idea from concept to reality? Can you talk us through the creative process of bringing a Lego design to life?

The design depends on the model. If it is a building then we will scale it and work out the dimensions and calculate the number of bricks we will need. When they are delivered, we get cracking. If we are building an animal we tend to use software to design it on. This then gives us a layer by layer plan of the build. Quite often we build around a steel frame as it makes the model easier to move, plus it covers us for all aspects of health and safety.

6. Tell us about your current projects…

We are currently building a mosaic for the new library in Slough, UK, which is due to open at the beginning of September. I can’t share details of our other projects because I’m bound by client confidentiality.

7. What have been your most memorable LEGO projects to work on to date?

We were especially proud of the world-record breaking 12-metre-tall Christmas Tree which went into St Pancras train station in 2011. 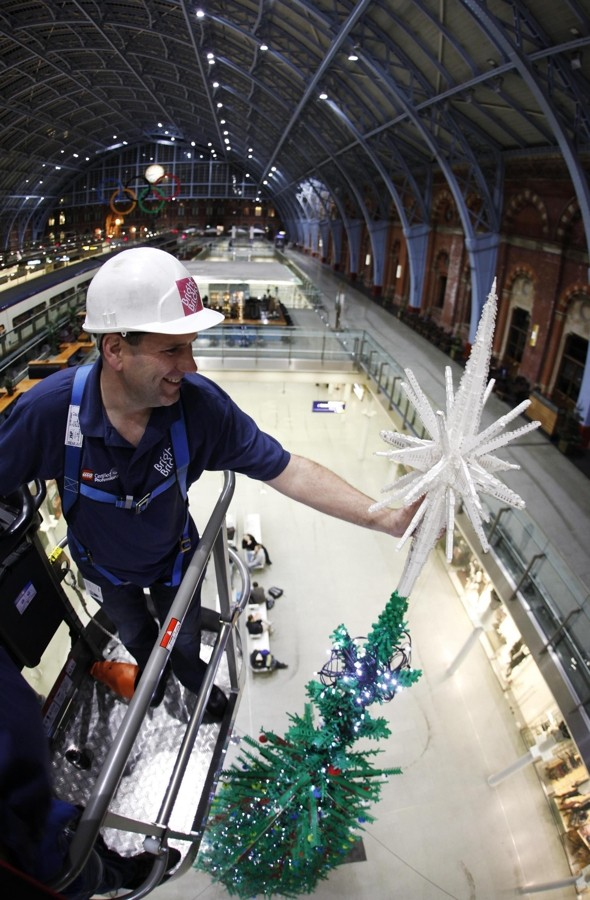 Balancing act: placing the star on the top of our Lego Christmas tree, St Pancras station

Some of our other projects include: a room-sized replica of Wembley Stadium; the James May Toy Story life-size house; a huge model of the London Olympic Park; a full-sized caravan for a show at Birmingham’s NEC; a giant train for Christmas in Covent Garden; a Scooby-Doo for Warner Bros to launch a new Lego set; Star Wars figures for The Force Awakens, a series of Lego London Underground maps showing how the Tube network has evolved over time and how it will look in 2020; plus many privately-commissioned portraits. 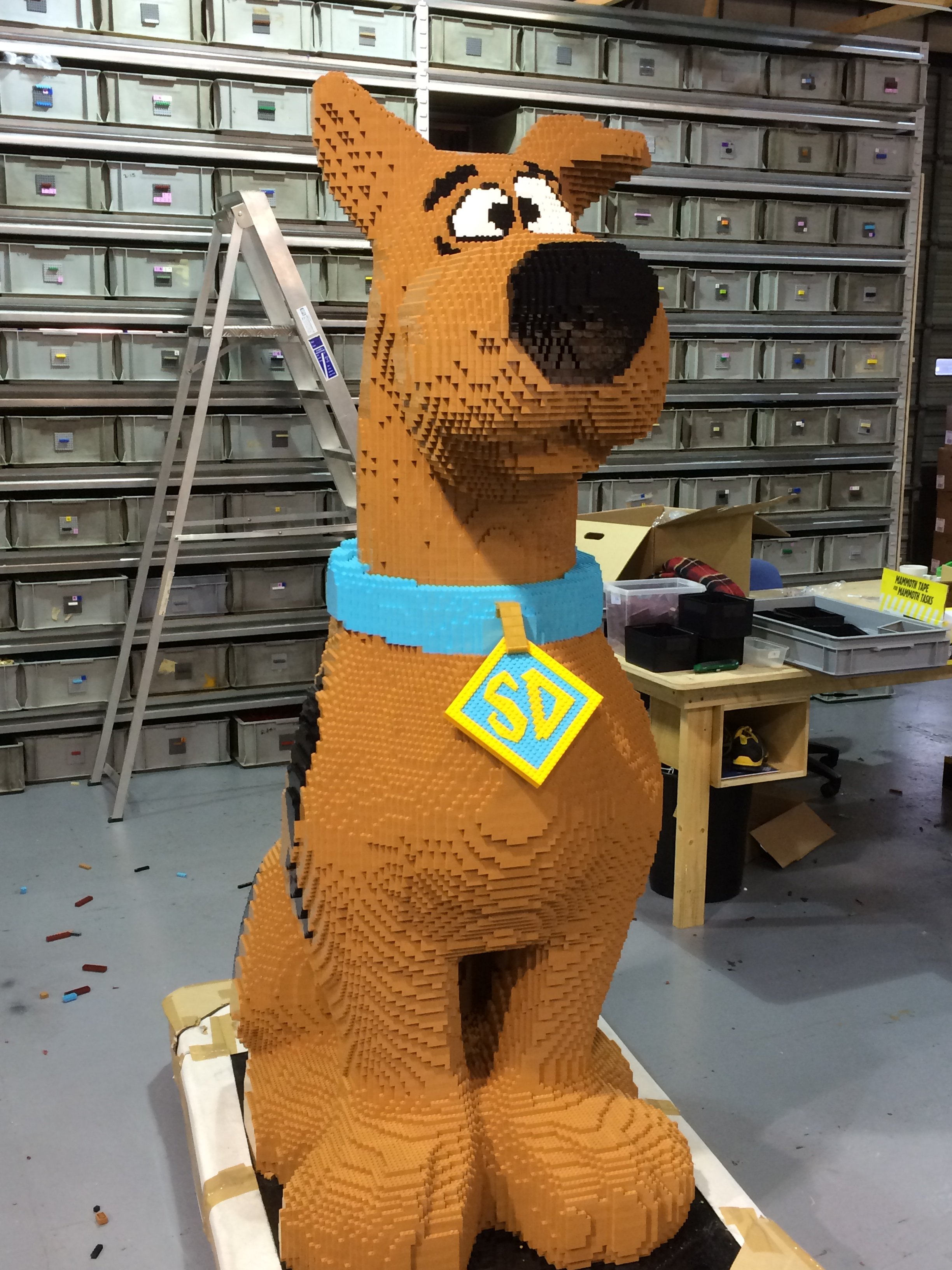 8. What’s the biggest, most complicated and most expensive design that you’ve ever been commissioned to create?

It’s actually a project we’ve just finished working on for Jaguar Land Rover which has set a new world record! It is a contemporary model of Tower Bridge to promote a new vehicle launch. The model is 40m long and the towers are 12 meters tall making it the largest LEGO model ever! It’s completely white, contains approximately 5.75 million bricks and has been built by a team of 20 staff who have worked on the project for two months. The big reveal will happen in a private location but afterwards Jaguar Land Rover will use the model in various locations.

9. If you had an unlimited supply of bricks and no time constraints, what would you build?

10. How many bricks do you use a month and what’s your favourite Lego element?

As a company, we usually order around a million bricks a month from Denmark. I like the 1 x 2 stud brick best; with that one size you can build almost anything. 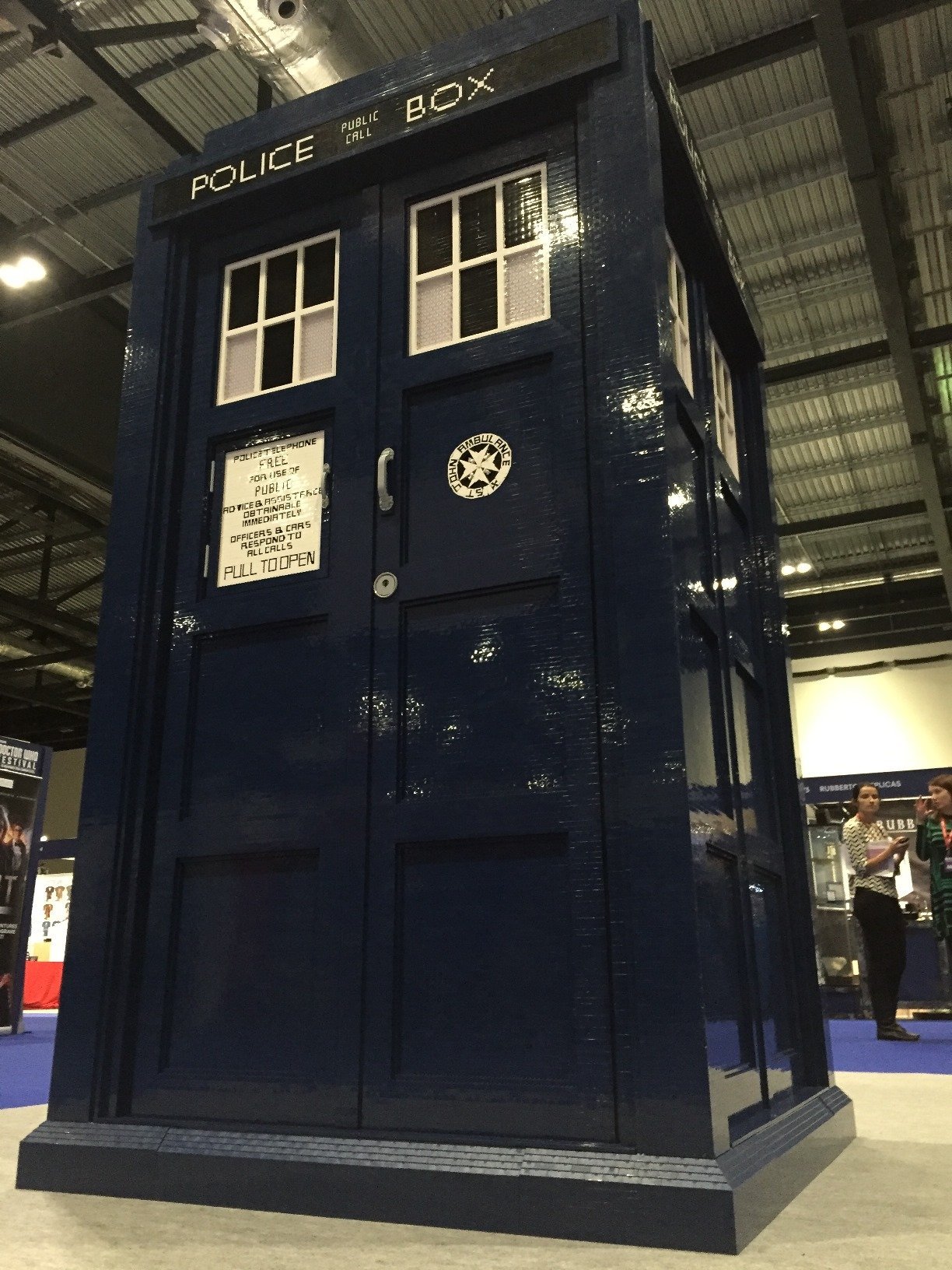 11. Why is Lego still as popular as ever?

I think Lego has stood the test of time because it is so versatile and such a wonderful form of creative expression: the only limit is your imagination. Plus there’s that satisfying click when you fit bricks together. For anyone who wants to stretch their creative muscles I suggest thinking outside the box and trying something that you wouldn’t necessarily know how to build.

12. How does one become a Master Builder? What advice would you give someone who wants to turn their passion for Lego into a career?

Practise! If you don’t have lots of bricks don’t worry about colour; you’re looking to create the right shape so practise building curves from square bricks.

When hiring people, we look at their work ethic mainly, we choose people who are hardworking and committed, and those with an eye for detail.

For more information about Duncan and his Lego work visit the Bright Bricks website.

GET OUR NEWS LETTER 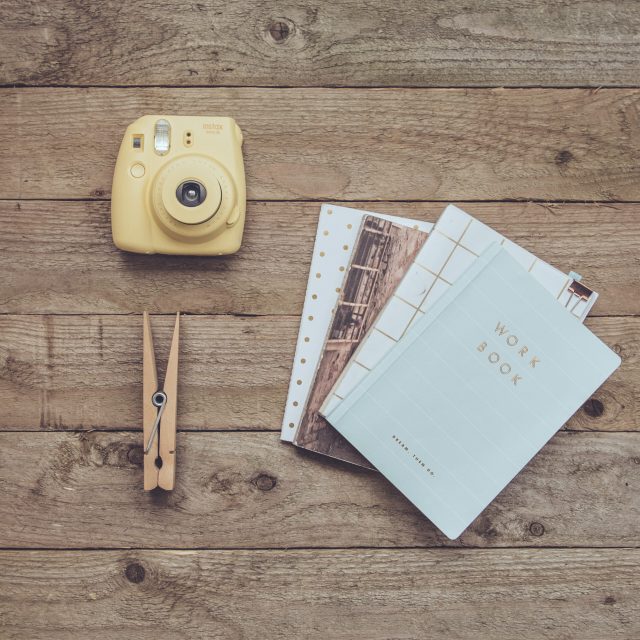 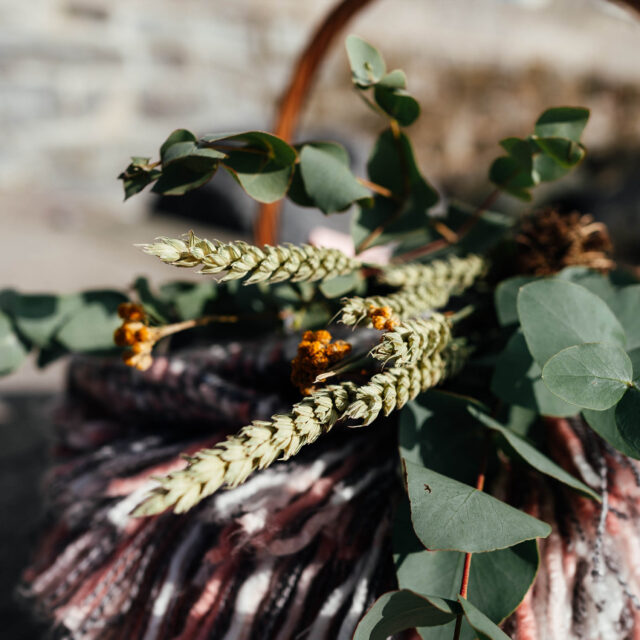 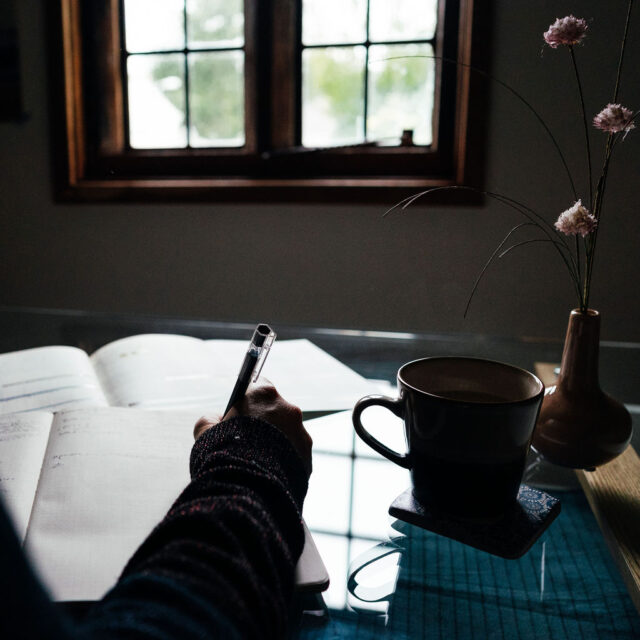 On ignoring the doubters and loving them anyway 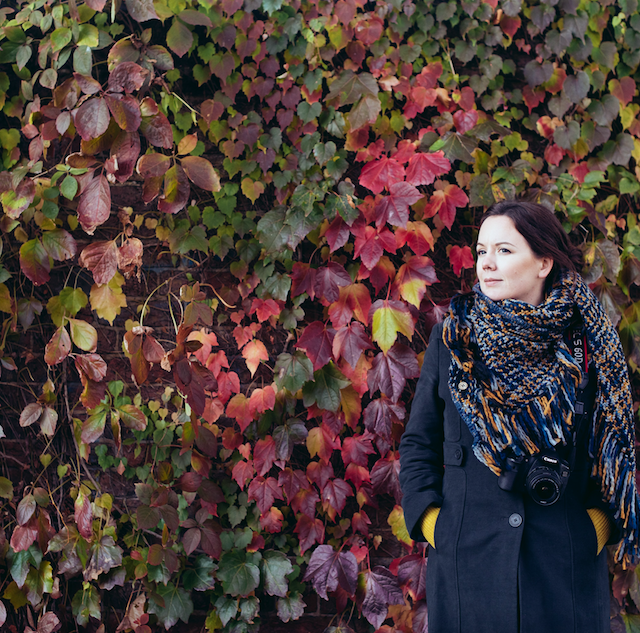 #tinyautumnpoem daily poetry challenge for November – Are you in?

Sign up to our newsletter to receive inspiration for doing what you love from our founder Beth Kempton, along with special discounts and early access to new courses